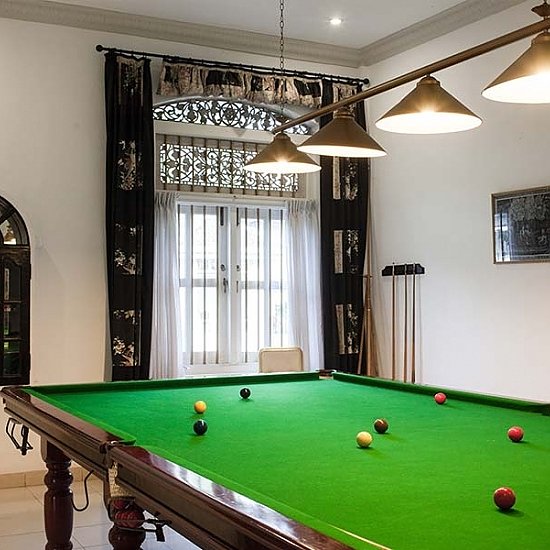 This stately and impressive home was built by the Nugawela family in 1884 and has much of the showy opulence of its "Victorian" times.  It really is one of the most magnificent architectural homes that we have enjoyed in Sri lanka.

Welcomed in a traditional Buddhist fashion, each guest is invited to light the burning oil lamps. Relax with a cool fresh juice on the verandah and then prepare to be amazed by the magnificently restored copper ceiling of the siting room.

Originally standing in 9 acres of land, surrounded by paddy fields, family inheritance laws saw this reduced this to just 1 acre.  Following the death of the patriarch, who held important office as the Guardian of the Temple of the Tooth, the house sadly passed through various hands, falling into disrepair as the years progressed.

The recent sensitive and radical restoration work aimed at maintaining the Brittish colonial architecture and the aura of the Walauwa, yet introducing the comforts and technology of the 21st century.  Many of the rooms have completely changed their function.  The new billiard room was once a grain store for the paddy fields, the new kitchen was formerly a cow-shed and the original out - door kitchen has become an attractive barbecue venue in the gardens.

The public rooms glow once more with the richness of the mahogany floors and the magnificent stairway which ascends in stately twists and turns through the open centre of the building. An unusual copper ceiling canopies the the ground floor area, which then leads through graceful archways into a formal dining room, where you may choose a small intimate table or sit with a large group at a banqueting table. You can almost hear the rustle of long silk skirts and smell the starch in the gleaming white shirt fronts of yesteryear!

Seating in the lounges is formal rather than cosy with French style brocade chairs, much open space and almost overwhelming drapes and fabrics -  a perfect film set for a Victorian drama.  Some accents are delightful, such as the brilliant chandeliers lighting the immensely high ceilings and exquisitely carved open work panels topping the majestic teak doors.

The verandahs and gardens have undergone a similar structural upgrading, with great care taken to restore the charm and shade of the stately old trees.

Boutique style has been achieved by restricting the conversion to quality rather than quantity. Just 10 bedrooms, including 4 suites, are individually named and furnished.

The Eastern flavour has been maintained in the Ayurvedic Beauty Spa; while modern facillities such as internet access and satellite t.v. are available in each bedroom. A visit to the library or small gift shop could fill any spare moments or rainy days. After a day of enjoying the many interesting sights around Kandy  relax with afternoon tea in the peaceful central courtyard, which is cooled by an elegant fountain.  The symmetry of the terraces, pillars, lawns and planting is reminiscent of an old university quadrangle.

Most of the rooms and suites are spacious and are recently decorated and furnished, largely with cream or white walls and dark wood furniture. For coolness the rooms have tiled floors and many have very pretty windows and kingsized or generous twin beds.

Each room has its own individual decorative scheme, some quite ornate and 'heavy' in the 19th century style of the Manor house.

Set over 3 floors the rooms are all very spacious with new ensuite shower and bathrooms.

Ethela   is a simple room with high level windows above the bed.  The main

window has a cafe curtain for privacy and there is a colourful patchwork style bedcover.  There is an elaborately tiled bathroom in the Edwardian style.

Kumudu   is a large room decorated in soft pastels and has large twin beds.  It is a light airy room with an antique dressing table and comfortable cane chairs.

Olu   is a suite with twin double beds covered with rich, dark bedspreads. An archway leads into a sitting area, very 'boudoir pink,' furnished with a brocade covered sofa and chairs.

Sooriya is a ground floor suite with a very unusual elaborately carved bed.  The sitting area has a conservatory feel with wicker chairs and table in a bay window looking onto the gardens.  Very English chintzy curtains complete the picture.

Araliya   is a simple, narrow room with a double bed.

Nilupul   has a double bed with a most unusual carved headboard.  A tv perched on a high shelf might not make for comfortable viewing, but who goes to Sri Lanka to watch tv?  A useful dressing area leads onto a pretty blue and white bathroom.

Rathu Nelum   is similar to the above

Eramudu   is a spacious duplex with dressing room and bathroom on the lower floor and elegant staircase leading to the bedroom above. The delightfully light bedroom is enhanced by the intricate carving over the windows and the soft apricot curtains and bedspread.

The formal and rather grand dining room has a large banqueting table in one area, seating perhaps 14 people in comfort .  This would be a wonderful setting for a small wedding party or family celebration.

Otherwise dining is at separate tables spaced out around the room, all elaborately set with long gold cloths and napkins.  The high ceilings, detailed curtains and decorative features all contribute to a great sense of occasion.

We visited Manor House soon after its opening and it is hoped that the new manager  will relax the style of service a little. The staff are dressed to full silver service  uniform, complete with white gloves.

We 'dined' on a traditional lunch of fish biryani baked in banana leaves  accompanyied by curries of fruit and fresh vegatables. Wattalapan was served to perfection with a delicate sprinkling of cashew nuts.

Things to do & local tips